Why we love this tour

Experience the wondrous North Iceland region, packed with many of Iceland’s remarkable natural attractions and strong arctic characteristics. Explore the furiously steaming geothermal fields and volcanic landscapes in the Mývatn area, visit some adorable and colorful villages; age-old turf houses and churches, some of the largest waterfalls in Europe and more.

We will pick you up at 9:00 am and hit the Ring Road. After a 1.5 hour drive, the day will start with a refreshing, short hike around the impressive volcanic crater, Grábrók. This crater was formed in an eruption approximately three thousand years ago and lies right next to the Ring Road.

There are two other craters formed in the same eruption that become visible once we climb Grábrók along with the seven-square-kilometer lava field that surfaced during the same volcanic event. It is a short, easy, but incredibly scenic hike and the perfect way to start our memorable adventure.

Next, we will leave the beaten path in search of a real hidden gem. After another 1.5 hour drive, we will arrive at a beautiful fjord where we will see a totally unique rock formation. Hvítserkur is a 15-meter (49 feet) high basalt stack that looks like a dragon or an elephant drinking from the water. The bizarre phenomenon stands in the water surrounded by beautiful natural scenery.

Next, you will get the chance to pamper your taste buds and discover where all the strength and energy of the Vikings comes from. We will visit a famous local microbrewery in a tiny village. The hour-long beer tasting includes a guided tour through the brewery where the owners will introduce some of Iceland’s best craft beers and explain how it is made. You will even get to keep your beer glass as a souvenir!

From here, it is only a short drive to Dalvík, a small fishing village where we will spend the night in a cozy hotel. In winter, we will look at the Northern Lights forecast every evening during the tour to try to catch a glimpse of this beautiful phenomenon.

The second day will start with a drive to a stunning and historic waterfall. Goðafoss, the waterfall of the gods, was named after Iceland switching from the Norse religion to Christianity. According to the legend, the person who had the right to make Christianity the official religion of Iceland threw his statues of the Norse gods into this waterfall.

The water falls from a height of 12 meters (39 feet) over a width of 30 meters (38 feet). The waterfall has a unique shape of a half circle, making it absolutely picturesque.

After a short drive, we will reach the Lake Mývatn region. Covering an area of 36.5 km2, Mývatn is the fourth largest lake in Iceland. Countless tiny islands dot its surface, surrounded by a thrilling volcanic landscape, and home to an incredibly vibrant range of flora and fauna. This area is deservedly one of Iceland’s most valuable protected nature reserves.

During our travel around the lake, we will visit the insanely enchanting Skútustaðagigar pseudocraters. These interesting geological features were formed when fresh lava entered the lake and trapped the wet sediment underneath, causing many steam eruptions. This happened approximately 2,300 years ago. Today, the picturesque, small craters are covered with grass and there are marked walking paths through the area.

We will continue by discovering some more about the region’s violent volcanic history. Just a few minutes from the craters is Dimmuborgir, there is a fascinating lava field. This incredible site is loaded with massive lava rock sculptures, huge rock pillars, caves, caverns, tunnels, and lava bridges. Walking through this alien scenery feels like being on another planet or even like being in the middle of a fairy tale full of trolls and magical creatures.

After getting lost and found again on the paths of the mystical lava park, we will hit the road again. It is a short drive to a scenic volcanic crater located right in Hell itself, or at least that is what the name of the Víti Crater means.

The 300-meter-wide crater was formed in 1724 when a massive eruption took place in the Krafla Volcano. The violent volcanic event lasted for five years. The crater is filled with milky blue and green water and the ground around it is still steaming, giving it a surreal look.

Next, we will explore one of Iceland’s most terrific geothermal fields, Námaskarð. The area is part of the Krafla volcano system and is highly active today. There is no fresh lava surfacing, but there are wildly bubbling hot springs, mud pots, and loud, meter-high fumaroles surrounded by poisonous soil with minerals that paint the site in extremely vivid colors. The air smells intensely of sulfur. This can be quite unpleasant, but the sights will definitely make you forget about the smell! 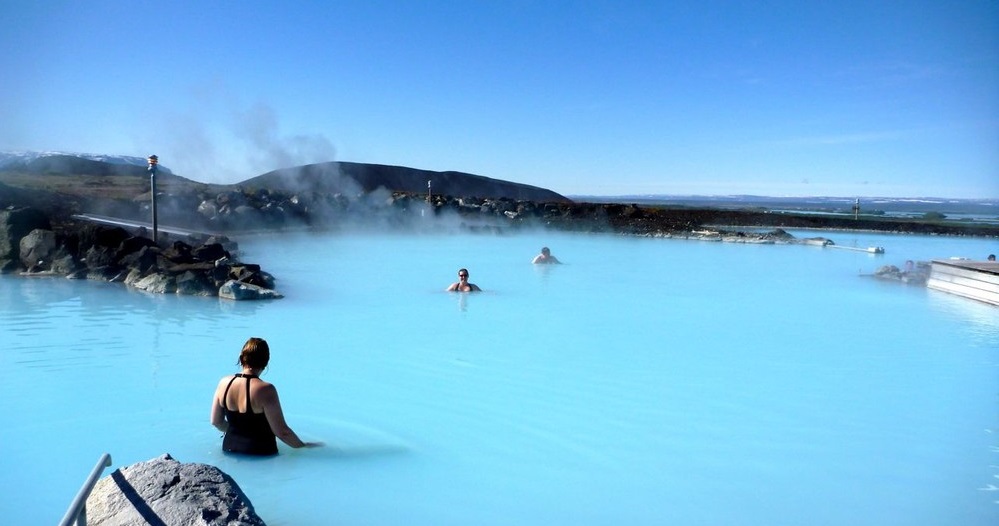 On our way to our hotel, we will stop at the beautiful Mývatn Nature Baths. It is often referred to as the Blue Lagoon of the North. Indeed, the color of the water is the same milky-blue as the Blue Lagoon while the entrance fee is half the price.

Enjoying a pampering bath here is an optional extra which you can do at your own cost. You will have an hour and a half to relax and enjoy the benefits of the natural geothermal water before we continue on to our accommodation in Akureyri. Those who choose to stay dry can have a meal or coffee in the restaurant and enjoy the view.

To end our long day, we will return to our hotel in Dalvík, the cute fishing village where we stayed on our first night. On our way back, we will drive through Akureyri, the capital of North Iceland. Even though it is very small with a population of fewer than 20 thousand people, Akureyri is the largest city outside of the greater capital area. 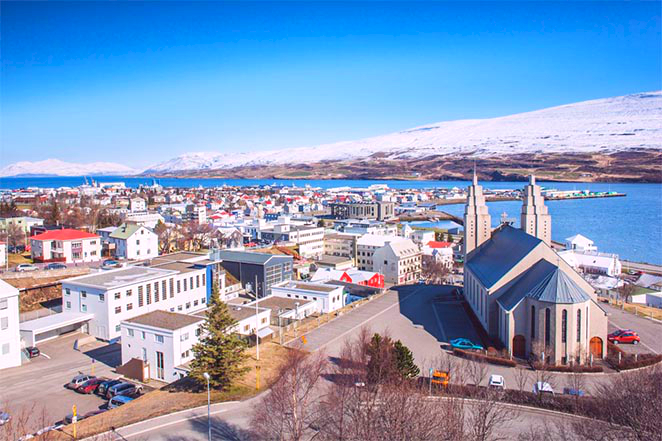 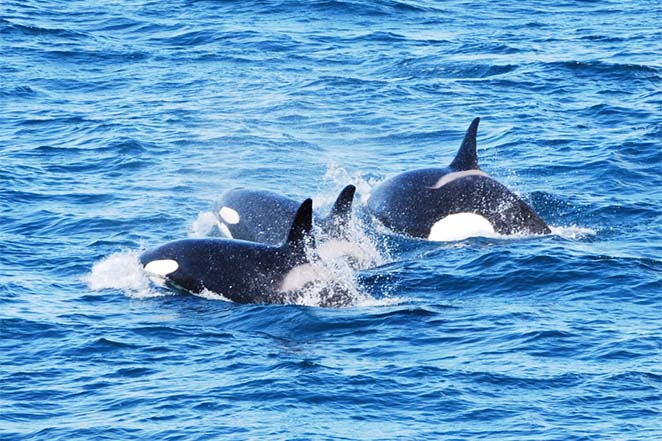 We will begin our last day with what may be the biggest adventure of the tour. We will board a boat to go on an amazing whale watching tour to see the gentle giants of the north! Dalvík is famous for its incredibly high whale watching success rates. These exceed 99% in summer, with anywhere from months up to half years in a row with 100% success rates.

We will probably see some humpback whales, as they are abundant in the bay all year round. Humpbacks are favorites of all visitors as they are not at all shy and often show off. Leaping, splashing, and approaching the boat, they are sensationally friendly to the whale watchers. White-beaked dolphins, harbor purposes, and minke whales are also often seen in the bay.

After seeing the whales, you will have the chance to grab a rod and do some sea angling on the way back to the harbor. We will barbecue the catch as soon as we arrive and share the fresh, amazing food together. 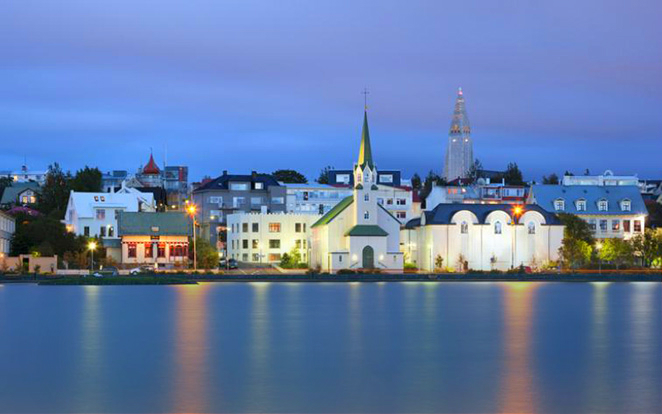 After the whale watching adventure, we will start our drive back to Reykjavík. It is a long way to go, but we will make time for a stop at the charming Glaumbær Turf Farm. The farm is made up of 13 age-old turf houses with walls built of turf layered in a herringbone pattern. The farm is said to have stood here since the Age of the Settlements (900 AD). The present buildings are newer, of course. The oldest one was built sometime in the 18th century.

Leaving the farm behind, we will head to Reykjavík, arriving at the city at around 8:00 pm. We will drop you off at your original pick-up location.

Due to the regulations implemented regarding the shuttle traffic in the downtown Reykjavik, we have offered 13 pick up points instead of directly picking up guests from accommodations . Please click here for further information.

2 nights at Hotel Dalvik or similar

Please note that all accommodations are subject to change based on the availability.

Accommodations of similar quality would be offered in case of full booking. 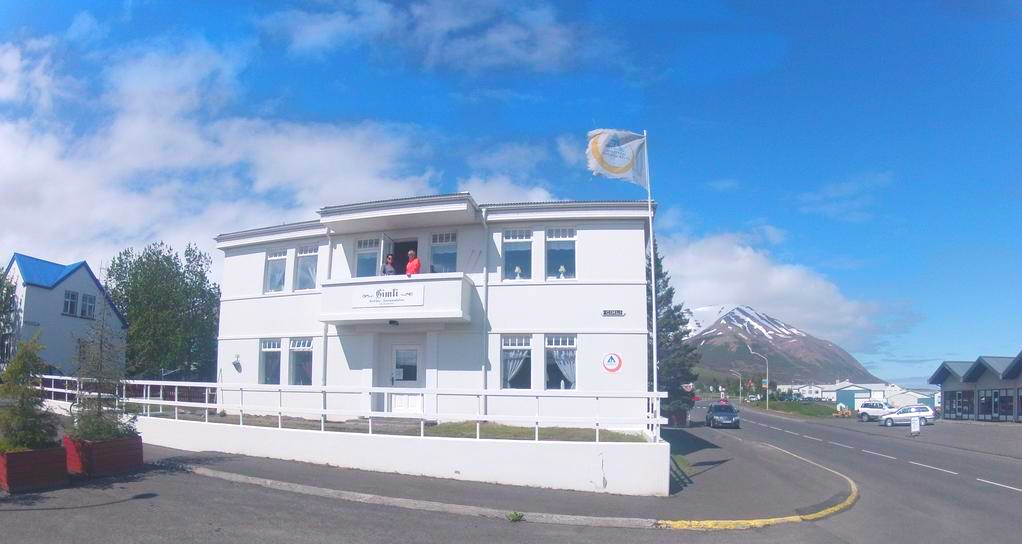 Each participant is allowed a day backpack and one luggage bag weighing a maximum of 20kg. Luggage storage is offered for a small fee and can only be guaranteed if booked beforehand.

What you need to know

Crampons are metal spikes that we attach to the soles of your hiking shoes, these enable you to walk on the glacier ice without slipping. Crampons will be used during glacier hiking, please make sure you have good hiking shoes. We recommend hiking shoes that are thick, sturdy and waterproof.

Please refer to below photos as reference:

Will I definitely see Northern Lights on the tour?

Are meals included on the tour?

Breakfast is included on days 2 & 3 at your hotel restaurant. Meals and beverages are otherwise not included on this tour. We will, however, be making stops where you will be able to purchase all necessities.

There are no reviews yet.